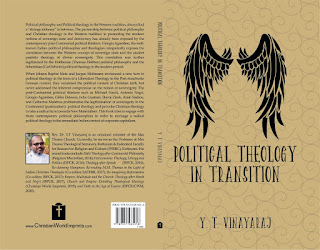 Y.T.Vinayaraj is one of the few Asian theologians for whom theology is a constant struggle. Despite the general belief that the so-called liberation theology has now more or less come to an end, he continues to see in it a means of thinking through some of the most important issues and problems of contemporary church and society. In this profoundly engaging book, he calls for a church of the multitude, a church without sovereignty - an open network in which all differences can be expressed freely and equally and a platform of hospitality where no one is excluded.

Forty five years ago Paul Lehmann bemoaned the widening gap between biblical and revolutionary politics and called for the transfiguration of politics in response to an environment of growing conflict and violence around issues of racism, capitalism and imperialism. His call was accompanied by a survey of the theory and practice of revolutionaries from Marx to Mao and Ho Chi Minh; from Fidel and Che Guevara to Camillo Torres and Nestor Paz Zamora; from Frantz Fanon to Martin Luther King, Jr., Malcom X, and the Black Panther Party. He wanted political revolutions to reconsider the question of violence and become more spiritual by turning toward the ideals of Jesus. However, his line of thinking seems to be that much must be said on both sides.  While reproaching revolutionary politics for its rabid materialism, he overlooked the fact that his own magisterial authority derived from an alliance of the politics of established power and the anti-revolutionary ideology of the church.

Unlike The Transfiguration of Politics, this book is produced on a different terrain. While Paul Lehmann practiced theology during the time of old imperialism which extended the sovereignty of European nations beyond their very borders with an inside and an outside, the work of Vinayaraj takes place in the context of what Hardt and Negri call Empire, the name they have given to the political form of globalization. Unlike old imperialism, Empire has no borders, no centre, and no limits. ‘It is a decentred and deterritorialized apparatus of rule that progressively incorporates the whole globe’. This does not mean that the sovereignty of nation states has vanished.  We live in a period in which the victory of global capitalism and the defeat of any political alternative to neo-liberalism seem somewhat assured.  It is also a period when global as well as national conflicts seem increasingly driven by faith-based politics.

In more and more countries those on the political right are questioning the separation between church/religion and state. Theological imperatives gain more space in the rhetoric of many contemporary political leaders. George W.Bush’s description of ‘war on terror’ as a ‘crusade’ is an example.  In order to cover up the contradictions marring the coherent identity of the nation, politicians are turning to the politics of good and evil. They depict secular politics as the battleground of good and evil. The politics of eschatology is also played out against progressive secular politics.

Any attempt toward a theology and ethics of responsible involvement in social change should take all these into account, especially, the challenges of both national politics and the politics of globalization.  Vinayaraj is well aware of this and he makes his points with admirable clarity. At a time when theory is being continuously marginalized, he draws on theories and methodologies of contemporary cultural studies and postcolonial studies for help in reflecting on the possibility of a radical political theology. Recruiting resources from Spivak’s notion of subalternity, Hardt and Negri’s ideas of Empire and multitude, M.M.Thomas’s theology of the cross, Agamben’s reflections on the coming community, Ambedkar’s contest against Brahmanical hierarchy, and Deleuz’s idea of ‘society of control’, he is exploring the possibility for theology to connect with movements for a radical democracy.

The task of theology, in accordance with Spivak’s notion of subalternity as ‘a third position of being human other than the self and the other’, is ‘not to speak for the margin’, rather, ‘to learn to listen to the unspoken voices of the margin’, and consider ‘the subaltern as teacher’. This book of Vinayaraj invites us to share this insight and, like Spivak, provokes us to attempt to change ‘conditions of impossibility – the hopeless and negative feeling that nothing will change for the disenfranchised – into a condition of possibility.’