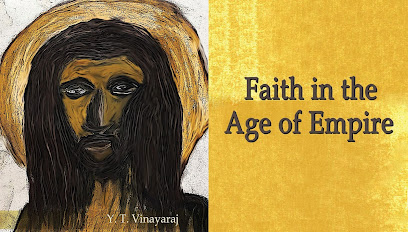 Second Book in the “Re-imagining Church as Event: Perspectives from the Margins” series of Council of World Mission by Y. T. Vinayaraj

Faith in spite of empires: a foreword

Faith is born in communities when humans figure out how to navigate the circles of life, under the eyes of unseen mana that are felt to be extraordinary, as if they are out of this world, or even divine. In Pasifika and Asia, faith existed prior to the rise of empires. When empires arose, they grabbed the land and with the land went the circles of life. Over time, empires act as if they own the mana that make creatures belong in the circles of life as well as give meanings to faith.

Any attempt to release the hold of empires over lands, waters, circles of life and people must therefore seek to break their claim to the mana. This is the primary task that Y. T. Vinayaraj attempts in this timely work, Faith in the Age of Empire: Christian Doctrines in a Postcolonial Sensibility. Vinayaraj’s intention is stated clearly in the introduction:

[T]he whole intention behind this work is to de-imperialize Christian doctrines and to signify them for a postcolonial spirituality. Postcolonial spirituality is the spirituality of the colonized and the displaced through which they signify a relational God, and ever-creating fluidity of creation and planetary humanity. It intends to strengthen their political practices of becoming and belonging in the midst of growing forces of fragmentation and discrimination. This work is done with the hope that it will enhance the church and the theological community to continue their ministry of signifying faith and practices vigorously for establishing a new world of justice in this world.

The specific empire in Vinayaraj’s sight is a religious one – Christianity, which spread over India along with the colonial expansion of the British Empire. With the mana of postcolonial spirituality, Vinayaraj shows that the Christian faith could be released from the colonial legacies of Christianity. He does this by revisiting, with postcolonial sensitivity, seven Christian doctrines: (1) God, (2) Creation, (3) Humanity, (4) Christology, (5) Church, (6) Mission, (7) Eschatology.

Vinayaraj’s work shows that, and how, the Christian faith may bear the fruits of mana in spite of the Western manners of the Christian church, in India and in other colonized lands. Flowing between the lines of this work is a healthy opportunity to exercise faith in spite of (read: instead of and in resistance to) empires.

Christianity has never existed in a vacuum, even though the church and its theologians have often acted that way. In this book, Y.T. Vinayaraj, aided by many other theological voices, develops a constructive argument that takes into account the fact that for 2000 years Christianity has shaped up in the context of empire. Of course, the purpose of this book is not to put down the legacies of Christianity altogether but to point out that there are always alternatives to empire and that Christianity has been able to produce some of those throughout its history and even today. This is what I have called the “theological surplus” of Christianity, a term which Vinayaraj picks up in this volume. In other words, Faith in the Age of Empire is a hopeful book, a book that is designed to help Christianity around the globe more forward in constructive and liberating ways.

In order to get to the good news, as I have argued in many places, it is important to develop an understanding of the bad news. This is what Vinayaraj does in this volume, guiding us from the oppressions of the Roman Empire, with which early Christians had to contend, to the Medieval empires, European empires of colonial modernity, and the more current embodiments of empire in our own globalizing age where the United States and a few other countries dominate. Empire, it is becoming clearer today than ever before, can be defined as what accounts for structures of domination and oppression through the ages. In our own times, the political structures empire are shored up and shaped by capitalism in major ways, linked with various forms of oppression along the lines of gender, ethnicity, race, caste, and class. Christianity, unfortunately, has often supported those unjust structures in economics, politics, culture, and religion, and there has been a price to pay. Nothing remained untouched over the centuries, not even its innermost beliefs and confessions. For that reason, theology has its work cut out if it wants to develop credible alternatives.

What is guiding Vinayaraj in many of his judgements and constructive moves is what he calls “postcolonial sensibilities.” Much work has been done in postcolonial theology, and a good deal of it is reported and reflected in this book. While one might consider drawing a firmer line of distinction between postcolonial theology and liberal US-theology—there is a colonial heritage to be taken into account in liberal theology as well that is often overlooked—the creativity and ingenuity of Vinayaraj is admirable as he reconstructs images of God, Jesus Christ, humanity, the church, and the future. Far too often, Christianity has developed images of God that correspond with images of power in imperial contexts: God as heavenly monarch, sitting on a heavenly throne, removed from everyday struggles, is one example. Another one is God as all-powerful CEO, an often-unacknowledged image that nevertheless seems to be widely worshipped in contemporary Christianity.  Such images, it can be argued, have all turned out to be idols and led people of faith astray. But what else should be put in the place of these images? Ultimately, I would argue that theologians do not get to decide because the most powerful alternative images of God arise not primarily form the heads of theologians but from unexpected places of struggle and marginalization that cannot be controlled by the dominant status quo. For this reason, it is important to listen not only to the cutting edge of academic research but, more importantly, to expressions of Christianity (and religion in general), as they arise from communities that have not sold out to empire.

Much theological work remains to be done, especially in relations to such communities and the resistance to empire that they are putting up, visible and invisible. While Christians have learned a great deal in recent decades, we still need to develop deeper understandings of local variations of empire, as they affect the majority of the world’s population. In some periods and in certain parts of the world, the power of empire manifested itself in softer ways, supposedly dispensing what it considered order, civilization, and happiness. In other periods and other parts of the world, empire promoted the hard power of war, enslavement, and back-breaking labor that has wiped out whole populations. Much of this continues today, even in the heart of imperial nations themselves, where the suffering is greater than often realized. COVID-19 has made visible again the deep inequalities in countries like the United States and elsewhere, where minority populations and working people die in much greater numbers from consequences of the disease, and where another world seems all but impossible.

What does all of that mean for the reconstruction of theology? I would argue that local voices at the grassroots deserve more of a hearing yet, even in the circles of postcolonial theologians. These voices are distinct—including indigenous populations around the world, grassroots movements that tackle oppressions along the lines of race, gender, and class, as well as Dalit communities in India—but closer encounters with them might make visible some of the overlaps as well. In the resistance against dominant top-down images of God, alternative images not on deconstruct dominant power but also identify alternative images of the divine that stay closer to the earth, the lives of people and communities, and that organize the powers of the “least of these,” with which Jesus identified.

Moreover, encountering a multitude of new theological voices and actors, how can resistance and alternatives be organized so that empires can be challenged successfully? Theologians need to pay more attention to how subjects of postcolonial empires organize. Armed with these insights, perhaps communities of faith can emerge as alternative spaces in our own times, not only embodying political but also economic and religious alternatives that shake the foundations of the status quo, not merely proclaiming the new world but realizing it.