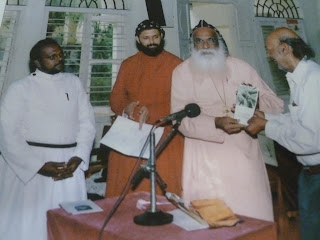 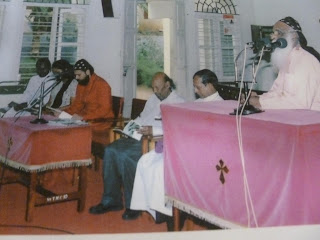 This article was first published in the Journal of Theologies and Cultures in Asia, 2008/2009, Volume 7&8 ISSN: 1682-6086. It was re-printed in "Challenges and Prospects of Mission in the emerging Context" (Faridabad: Dharma jyoti Vidya Peeth, 2010).
Re-visiting ‘the other’: Towards a postmodern understanding of Christian mission
Rev. Y. T. Vinayaraj
In the history of Christian mission there has always been the process of translating the faith into new languages and cultures. According to Andrew Walls the attempt to transmit faith in Christ across linguistic and cultural frontiers revealed that Christ had meanings and significance never guessed before.[1] However, the modern missionary movement bears the scars of its epistemological inclination with the colonial modernity. Colonial modernity that theoretically founded on the European enlightenment and Euro centrism, defined the modern Christian mission as the ‘White Man’s burden’ to reach ‘the unreached’/ ‘uncivilized’/ ‘undeveloped’/ ‘unevangelized’ of the ‘other’ part of the world.
Robert Young defines the Euro centrism as the epistemological search for the ‘other’.[2] The modern theology of mission[3] that constructed in the Euro-centric mould has been monolithic and assimilating. It consciously constituted a ‘missiological other’ by the programme of universal mission. The ‘metanarratives’ of modern universal mission stories but consciously neglected the voice of the local ‘missionized’ people. Of course, the encounter between the colonial missions and the ‘natives’ has constructed specific subjectivities for both. Lamin Sanneh contends that Christianity has grown as a result of its encounter with the “other”.[4] Time has come to re-visit this missiological ‘self’ and the ‘other’. Postmodernism as an epistemological shift, provides necessary tools to the people those who have been categorized as the ‘missiological other’ or ‘colonized’ to re-locate their subjectivity and create different discourses of Christian mission and theology. This paper looks at this issue and tries to sketch out the contours of a postmodern theology of Christian mission through a deconstructive reading of the biblical text Mark 5:1-21.
“Mission is not an innocent word”: postmodern< > modern dialectics
According to Jacques Derrida, the Euro centrism is nothing but ethnocentrism, the process in which ‘the West’ imposed itself upon the world. It is well evident in the programme of modern missionary movements. In parallel to the European colonial agenda, it carried on the universal mission programme especially ‘evangelizing’ the ‘aboriginals’ of Asia and Africa. In the modern sense the mission was always the mission to ‘the lost sheep’. Sociologically speaking, the mission envisaged by colonial modernity was empowerment programmes in order to ‘lift up’ the ‘weak’ and the ‘vulnerable’ to the modern/civilized/ developed civil life. Thus we had the ‘missions’ to Africans/ Afro-Americans/ Asians etc. The changed social-theoretical, epistemological and theological context challenges these colonial ‘missiological metanarratives’ and provides impetus to create new ‘little’/ ‘local’ conversion stories of the so-called ‘colonized’.
Postmodernism is more an active critique of the Euro centric premises of Western knowledge. In the postmodern theoretical framework[5], Jacques Derrida’s deconstruction programme shook the Euro-centric epistemic foundation, through which the project of modernity rationalized the existence of “non-European”-“variations”-“Marginal”-“colonized” subjectivities.[6] Derrida detected a series of binary oppositions in western thought that have been pivotal in efforts to establish an order of truth: viz, speech/ writing, presence/ absence, meaning/ form, soul/ body, masculine/ feminine, literal/ metaphorical, natural/ cultural, transcendental/ empirical, cause/ effect and so on. The two terms in these oppositions do not represent equal values. The first term is superior and the second is defined as a derivative or subordinate. There is a power/ knowledge play in the construction of meanings. Derrida undermines this hierarchy. By disrupting/ displacing the hierarchy, deconstruction allows the so-called “colonized” can represent themselves as active social agents rather than as a binary opposite. This is the political programme of deconstruction. For Robert young deconstruction is a deconstruction of the concept, the authority and the assumed primacy of ‘the West’.[7] This is the postmodern theoretical tool, in which the so-called “missionized people” find possibilities in their theological/ hermeneutical programme of altering subjectivity.
Here an attempt is being made to sketch out the contours of a postmodern missiology through a deconstructive reading of the story of the ‘Gerasene Demoniac’ in Mark 5:1-21.
1. Re-defining discipleship: The integral motif of Christian mission
According to the Biblical theology, mission is the divine engagement for transformation (missio dei). People of God/ Church is the called out community to be a collective agency of this divine intervention of transformation. The mission of God is evidently embodied in the person of Jesus Christ. Biblical theology defines the mission as a programme of calling everyone to the new life in Christ as a community. Mission entails movement, and this is the movement of invitation to discipleship. Christian discipleship is a kind of formation through which the human agents in association with the Divine transform themselves as the divine agents of kingdom of God.

In Mark’s Gospel the whole picture of ‘Gerasene demoniac’ comes into the midst of the dialogue between Jesus and his disciples. The content of their dialogue is discipleship and it’s focus-the kingdom of God. Jesus constructs the message of kingdom of God consciously in order to re-construct divine subjectivities in the colonial setting of Roman imperialism. Roman imperialism provided a submissive ‘habitus’ for all through which it legitimized its power of slavery on all ‘subjects’. Jesus defines discipleship as a counter institution of a ‘discursive formation’[8] by which they re-define their subjectivity and social space (Mk.3: 13-15). This intentional strategy of Jesus is unknown to the common people (Ochlos). On the other hand the disciples are supposed to recognize it. Thus Jesus exhorts disciples not to be like the common people who do not realize the politics of the formation of subjectivity. That is why Jesus asks them on their way to Gerasene while there is a great storm, “why are you afraid? Have you no faith?” (4:40).

Entering in to the discipleship means engaging oneself for a renewed understanding of relationship. It is to enter in to the ‘responsibility for the other, being-for-the-other’.[9] It is an invitation to engage with new imaginations, new relationships, new practices and new dialogues of fraternity. The discourse of ‘Gerasene demoniac’ is also comes into the midst of these dialogical engagements of defining discipleship.