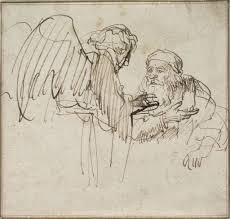 Called to be Angels; not to be Strangels

Luke 1:19: The angel replied, “I am Gabriel. I stand in the presence of God, I have been sent to speak to you and bring you this good news.”

I want to talk to you this evening about angels. Who are angels and what is their role in the salvific act of God in history? In the Bible we see the presence of angels in many occasions in the life and witness of Jesus Christ. Especially angels are unavoidable characters in the event of Christmas.    In Christmas story, we see angels in the role of the event managers.  They set the ambiance, prepare the actors, and invite many to be part of this Christmas experience. In Christmas episodes we see the angels are the hosts who make the event of Christmas possible.

The Greek word angelos means “messenger.” Some traditions say an angel is a spirit created by God and commissioned by Him for some special purposes (see Col. 1:6; Heb. 1:14). In both OT and NT, the angel is referred to as “messengers” who carry out the work of God (Dan. 8 & 9). Some other traditions defined angels as “higher human beings” who have enormous power and wisdom than human beings. OT mainly refers angel to “heavenly hosts” who always do praise and worship God (Is. 6).  There are traditions that define ‘demons’ as failed angels (remember the story of Lucifer). However, angels in biblical tradition are defined mainly as the “messengers of God.”

In Luke 1: 19 we see an angel--Gabriel who reveals his own identity very clearly.

1   1. Angels Reveal the Presence of God
Here Gabriel says that he is standing in the presence of God. He said this as an answer to the question of Zachariah. Zachariah asks: How will I know that this is so? For I am an old man, and my wife is getting on in years.” Gabriel was announcing the birth of the John the Baptist—the one who comes to prepare the way of the Lord. Elisabeth and Zachariah were not in a situation to spend time for worthless dreams. They were going through the difficult experiences of life. “Barrenness” was not the biological issue of the couple mentioned here; rather it was the political situation of lifelessness in the reign of Herod. (in Hebrew ‘barah’ means lifelessness).  Not the barrenness of Elizabeth that matters, but the barrenness—the absence of life in the whole Roman Empire was the issue here. The personal desperate experiences of the couple signify hopelessness situation of the whole people in the Roman kingdom.

Roman Empire was aggressive, arrogant, and elitist. Survival of the fittest was its political motto. The weak and the vulnerable became marginalized. It is into this context of destitution and marginalization; Gabriel announces the birth of a child who is going to prepare the way of the coming of the Lord (vs. 17). Here the annunciation becomes a political activity against the reign of the Empire and prophetic activity in favor of the hope for the hopeless. That is well-evident in the song of Zachariah (vs. 78 & 79): “By the tender mercy of our God, the dawn from on high will break upon us to give light to those who sit in darkness and in the shadow of death to guide our feet into the way of peace.”Angel invites many more people like Mary to see the meaning of their life in the salvific act of God, and instilling hope into their lives over against hopelessness, anxiety and death—the experiences of the Empire.  Angels brings hope and life to those who live in darkness and desperation. The role of the angels is to presencing God—the God of hope and meaning. Presencing God in the midst of desperation, depression and destitution is the call and the commission of the angels in this world.

2. Angels Share the Good news of God
Here Gabriel explains his mission; to preach good news to the people who live in darkness. Preaching God is always connected to presencing God. What is preaching? Preaching is an act of presencing God in the midst of the crucial situations of life.  In Dan. 8 there is a reference of Gabriel. Daniel had a vision; but he could not understand it. Vs. 16 says; “Then the voice came from heaven and said, Gabriel help this man to understand the vision.” In 9:21, we read Gabriel approaches to Daniel and says: “Daniel, I have now come out to give you wisdom and understanding.”

Interpretation is not just carrying a message; but to make it meaningful to the receiver. It is to interpret things for the listener. Interpretation makes translation purposeful meaningful. Gabriel when he talks to Zachariah refers to many OT characters like Elijah and tries to translate the purpose of God in the calling of the people of God—the Israel.  While speaking to Mary in the following verses Gabriel even claims that God is going to retain the Davidic dynasty (vs. 32). Interpretation happens within the wider horizon of the economy of salvation.

There is a Greek god –Hermes who interprets the message of God. It is after him, the process of interpreting Biblical message is called hermeneutics. Biblical hermeneutics is an act of interpretation of the divine message in order to make it meaningful to the contemporary. Biblical interpretation is an angelic mission through which the church translates the message of salvation to the contemporary context. Or in other words, those who translate the divine message of hope and salvation into the human conditions of desperation and anxiety are called angels.

Seyoon Kim in his book entitled Christ and Caesar: The Gospel and the Roman Empire in the Writings of Paul and Luke comments that the Lucan annunciation stories  serve a purpose of portraying Jesus as the Messiah—the one who is coming to restore the dynasty of David—the egalitarian dynasty against the reign of the Roman Empire. Thus translation of the divine message of the coming of the Lord or the birth of the messiah or the good news of Christmas in the age of Empire is a political activity. It is to de-imperialize the culture, public space and human relationships that make human life perilous and precarious.  One who understands this divine purpose in history and engages in the process of meaning making today are called angels.

For St. Paul the ekklesia –the Church is a community of angels who is being called to proclaim the good news of salvation (2 Thessa. 2: 13f). For Paul church has an angelic role to play in this world of Empire in favor of the weak and vulnerable. It is this role that makes church meaningful today.  Today in India we live in a context of socio-political and cultural imperialism where the weak find difficult to survive. A piece of beef is more expensive than a human life. Dalits always live under the threat of killing.  Farmers live at the edge of life and death. Sharuk khan is no more an actor in India today; there is new declaration by the Hindu fundamentalists that he is just a Muslim-a stranger in his own country while wee see the underworld king Chota Rajan finds his home here in this land.  The Green peace movement is labelled as an anti-progressive movement while Multi-National Corporates assume their role as the authority of progress and development.

What is the role of the church in India today?

The call of the church India today is to be angels; not to be strangels.

Church is called to be angels; not to be strangels.

May God bless us to be angels to presencing God and sharing the message of salvation in and around us!
Amen